The whole family is gathered in the car, looking forward to visiting Grandma. The best waffles in the world awaits, but not today. To everyone’s surprise the doors are locked. Grandma is playing poker. 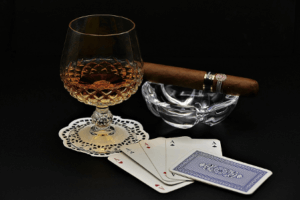 Although people still use the classic card of decks when meeting family and friends, poker online has become extremely popular. There is hardly a person who has never heard of poker, and it is strangely enough a game that is appealing and played by people of all ages.

Several surveys and figures from the gambling industry show that over one million people around the globe play poker in one form or another. This means that poker is as popular as golf and tennis. Why poker has gained such immense popularity remains a mystery to many.

As a card game, poker was also a very popular game, similar popularity as bridge and other famous games. As a money game poker was also in the past the go-to game instead of bridge.

The fact that online games are so similar to playing the games physically, led to a rapid adaption to the online market. People did not need to learn anything new but could go straight into the online games and play their beloved games as they would normally do. Poker variants online, such as Texas Hold’em and Omaha therefore quickly became popular because they are exactly the same as in real life.

Previously, the disadvantages of online poker were that you did not get the same excitement as at a physical table. It is difficult to get a faint whiff of perfume or cigar, unless you make it yourself.

Relevant aspects of poker, such as bluffing and body language, has so far been absent in online poker, even though there are a lot of indications that artificial intelligence and better technology soon will rectify this. 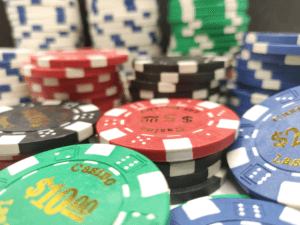 Almost all people think that poker is just based on luck, and of course it is important to be lucky, but poker is much more than just luck. Everyone who has played a lot of poker knows that you must have a good set of skills, and in the long run, those with the greatest skills are the winners.

There are many professional players who study poker strategies. They all agree that it is the players who master the strategies and skills that are most likely to win the most championships.

In other words, the best poker players are those who study mathematics and odds. The essence of the knowledge is that you have to bet more when you have the statistical advantage of winning and bet less when the odds are against you. Of course, poker strategies contain much more than this is a core factor.

As in all other games, the desire to win is strong. Of course, people are interested in money, but the best poker players are also concerned with the honour and the feeling you get by winning a tournament.

Last but not least, poker is a social game, and unlike many other games of chance, poker is played against and with other people. In blackjack, for example, you do not play against other people, but against the dealer.

That’s why poker is so popular among groups of friends and everywhere people like to organise tournaments.

Do you hope to learn the finer points of poker? Have you ever wished to play like the professionals? If so, there is nothing wrong with a bit of extra inspiration. While watching a few WSOP hands is always wise, why not also step outside of the box into the world of cinema? There are […]

5 Types of Poker You Should Get Familiar With this Year

Poker is one of the most popular casino games with more than 90 million people playing it worldwide. The card game is available both at land-based casinos as well as online casinos. Though Texas Hold ‘Em is currently the most prevalent type of poker, there are numerous other variations of this beautiful game. If you […]

A Brief History of Online poker

What Gives Online Poker Its Longevity

The modern landscape of online casino games is one of the broadest and well-known forms of interactive entertainment the world has ever known. Poker makes up an appreciable part of that equation, with its myriad forms each finding their niche with amateur and professional players both. Yet, as many forms of digital entertainment come and […]

Poker is a card game that has fascinated players for several decades. With the World Series of Poker app you have the opportunity to try one of the toughest and most existing card games for yourself, directly from your smartphone. Take part in exiting tournaments and enjoy a bonus galore with this popular poker app.

If you are looking to set yourself up for a chance to become the next Jake Schindler, then it’s about time you started small, just like he did. Head on to a promising online platform and get yourself signed up. A good point to start would be to look for legal casinos in Denmark and […]

If you are looking for someone to emulate in the poker world, then Scott Seiver is your go-to. He started small and right now he is in the big leagues of professional poker players in the world. Head on to a promising online platform and get yourself signed up. The Danish Mr. Green review is a good point to […]

Sam Greenwood has made huge winnings and losses in the World of poker. He plays at both online platforms and at live tournaments. What is Sam Greenwood net worth? Read to learn more.

Who was the poker legend, Johnny Moss? What is Johnny Moss net worth? Learn about Moss' achievements, winnings, losses and poker strategy.

Lily Kiletto is not a new face in the poker community. She stepped into the game in 2011 and has made a couple of winnings. What is Lily Kiletto net worth? Read to find out more.

Who is the well-known poker player, Phil Gordon (Tiltboy)? What is his net worth? Learn about Gordon's net worth, accomplishments, failures and strategy.

Have you heard of the famous poker player, Erik Seidel? Are you interested in knowing about his poker escapades, especially Erik Seidel net worth?

Chris Moneymaker is a famous pokey player. Do you have an idea of Christ Moneymaker net worth in poker industry? Read on to learn more about this exceptional player.

Who is Reckful? Is he really popular? What is Reckful net worth? All these questions will be answered here. Read on to find more about this young celebrity.

Well, is it true that Matt Kirk net worth is $600 million USD? Where did he get all that money from? Could it be from poker games or other businesses?

Apart from his net worth, we will also look at his background, his business enterprises, and poker games. We will highlight his winnings and losses.

Phil Ivey is one of the top poker players in the industry and he has earned a name among elite players. Over the years, Phil Ivey net worth has grown immensely and he has been able to create a niche for himself among his contemporary.

Jason Koon’s success in the world of poker is traceable to his strong background in online poker. He is very famous for playing regularly at the biggest high roller.

Jason Mercier is no doubt one of the most successful professional poker players alive. A look-alike of Ryan Gosling, Mercier is a likable and gifted poker player who has made an amazing impact in the world of poker.

Popularly known as “The Great Dane” Gus Hansen is another professional poker player worth knowing and learning from.

Justin Bonomo, also known as ZeeJustin among his online poker fans, is an exceptional poker player. He is best known for his exploits and winning at the World Series of Poker of 2018 during the Big One for One Drop event.

David Peters has no doubt made a name for himself in the poker community. The young high stakes tournament professional player from Toledo, Ohio has won at many tables.

Who is Phil Galfond? If you are a poker fan, you definitely would have heard this name come up in poker news every now and then. Galfond is one of the top poker professionals who have earned their place in the world of poker elite across the world.

Have you ever wondered what Daniel Negreanu net worth really is? You don’t have to ponder on it further. Here, you will read everything you want to know about this poker player extraordinaire.

The name, Dan Bilzerian, always create a buzz anywhere it is mentioned. He is not only a poker pro but also an Instagram celebrity. He has been dubbed a playboy by many and he is living up to the name to the fullest.

When you hear ‘Durrrr’, only one name comes to mind and that is Tom Dwan. Dwan is a famous American poker pro and he has been on the poker scene for a long time now.

There is no way you will talk about popular poker pro that you will not mention Doug Polk. He is known for his skills and confidence at the poker tables.

Andrew Neeme is one of the faces you see at poker tables, both online and at physical casino, and wonders what exactly they are really up to. At times, you would want to wonder if he is actually a professional poker player or simply a poker Vlogger.